The 1973-74 team would open the season with a 60-47 against Valpo at home before a sold-out gym.  It was the sixth straight win over Valpo (a school record).  Unlike the previous three seasons, the Indians did not win sectionals, falling to Valpo on the opening night of the tournament 48-42, ending the three sectional title run.

Senior Russ Lindner would finish his career ranked fifth in all time scoring at PHS behind Greenway.

Lindner along with his classmate Kelvin Riley and Greenway are the only three players in Portage history to have beaten Valpo five times. 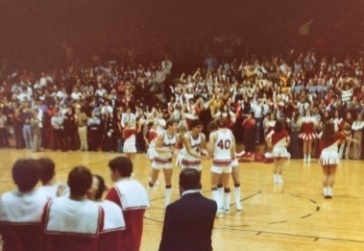 Attendance was high for most games during the era 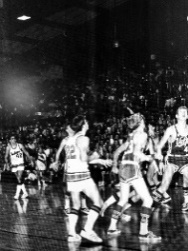 Morrie Goodnight came to Portage for the 1968-69 from South Central.  As the South Central coach, he had a 55-11 record in three seasons and had gone to the finals of the Michigan City sectionals each year, being defeated by the larger (school size and roster size) MC Elston.  Prior to South Central he had coached football and basketball at Monticello/Twin Lakes.  His 1962-63 team at Monticello had won the Monon sectionals and made it to the regional final at Logansport.  The following year at Twin Lakes (Monticello had consolidated) he brought his team to the Portage Holiday tourney in December 1963, winning the title. In the afternoon game his squad had beaten the Harold Cox coached PHS team.  What many hoop fans may not know, Goodnight and Cox had played against each other in college when Goodnight was at DePauw and Cox was at Evansville.  Goodnight would replace Cox at Portage when Cox left to start the basketball program at Kokomo Hayworth (in his hometown).

Coach Goodnight has a noteworthy prep and collegiate athletic career.  As a high school junior (1952-53) at Morocco (since merged into North Newton) he had led the nation in passing accuracy.  Morocco played 6-man football and while leading the undefeated team and 6-man state champs that year he had completed 62.3% of his 125 passes.  In the three years he played football at Morocco the teams went 21-2.  PHS fans may be surprised that a freshman teammate on that undefeated Morocco state championship team was long time PHS football coach Les Klein. 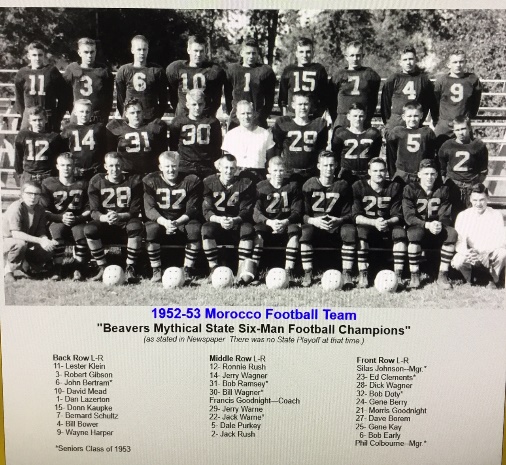 The following year his father took the football and basketball coaching jobs at Covington High School.  He once again led the nation in passing accuracy with 59.3% of 150 passes.  He also played basketball at Covington his senior year and set the scoring record for a single game in his school gym of 33 points.  His basketball talents were significant enough that he was on the final list of 100 high school seniors to be considered for the All-State team that would play Kentucky.

Prior to starting his DePauw career, he was selected as a quarterback in the East-West football.  He earned this assignment, despite playing 6-man football, as his talents were recognized by the coaches and sportswriters.  One of his teammates on that team was future All-Pro Alex Karras out of Gary Emerson.

He would have a stellar three sport career at DePauw, excelling in football, basketball and baseball.  In his final season as the DePauw quarterback, he would lead the nation in passing accuracy once again, completing 62.3 % of his 99 passes.  Stats show he finished the season by completing 50 of his last 60 passes.  He was inducted into the DePauw Athletic Hall of Fame for his career achievements in 1990.

Goodnight would leave Portage after the 1979 season.  He would return after several years to coach South Central.  Though his 10-year record at PHS is slightly below .500, 111 wins and 115 losses, his legacy of 3 straight sectional titles and six consecutive wins over Valpo is extremely noteworthy.

Larry Casbon was the junior varsity coach during these three years.  He considered the primary focus of his job as the development of players for their future efforts with the varsity.  In that endeavor (and from personal experience) he excelled.  Coach Casbon had been on the Boone Grove team that had lost to PHS’ first sectional title team in 1956.  He would go on from Boone Grove to play basketball and baseball at David Lipscomb College in Nashville, TN.  He came to Portage as a teacher in 1961.  He would be a highly successful baseball coach at Portage, as his teams won four consecutive Duneland Conference baseball titles in 1971/72/73/74 and the schools first baseball sectional title in 1972.  He would become the PHS Athletic Director in 1976.

Les Klein assisted the basketball team as well as being the head football coach during these years.  For several years he would coach the sophomore or C team.  Whereas Goodnight would focus on overall strategy and Casbon shooting, Klein’s focus with the varsity was defense and rebounding.  As mentioned earlier he was a former high school teammate of Goodnight’s at Morocco.  In 1956 he would lead his Morocco hoops team to a sectional title (same year as PHS’ first sectional title ironically).  He would go on to have a stellar career at St Joseph’s College and is a member of their Football Hall of Fame.  Of course, PHS sports fans will recall him guiding the Indians to the state title in football in November of 1977.  He was inducted into the Indiana Football Hall of Fame in 1990.

Bruce Lindner and Jim Samuel were freshmen basketball coaches during two of these years and would assist with scouting for Coach Goodnight.  Long time Portage hoops fans will recognize those names from their playing days at PHS.  In 1965-66 they led the team to a second-place finish in the Calumet Conference.  During that year, Lindner would score 566 points, setting the school record which was broken in 1988 by David Wayne who scored 603.  But Lindner still holds the highest scoring record for a season at 24.6.  In 1966 when Samuel finished his PHS playing career, he would be second on the all-time scoring list for PHS players with 840 points.  Both would go on to have stellar collegiate careers at Valparaiso University (Lindner) and MacMurray College (Samuel).  Both have been inducted into their respective college Hall of Fames.  Lindner in 2002 and Samuel in 1990.

Finally, Bob “Doc” Kerns should be mentioned.  He was the athletic trainer for the school and kept the players performing despite the minor injuries.  He was a trend setter in the field of sports training and was inducted into the Indiana Athletic Trainers’ Association Hall of Fame in 1991 and the Indiana Football Hall of Fame in 1990.

The talent in the coaching staff was considerable at Portage during this time and the success on the court reflected that.  In fact, the coaching talent was considerable across all sports, as PHS won the Duneland Conference All Sports five consecutive years from 1971-1975 (though no trophy was awarded in 1971).  In 1975, the school won both boys and girls trophies. 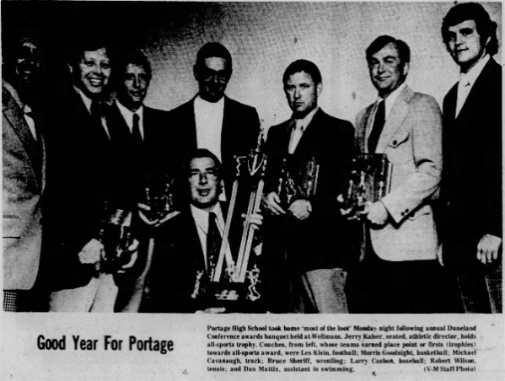