1972 – Overachieving for the Repeat 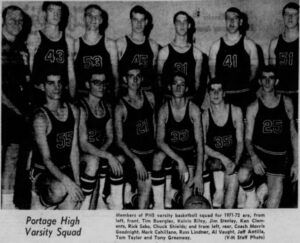 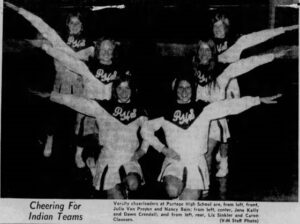 The Indians would open the 1971-72 campaign on the night before Thanksgiving at home against Valpo.  As expected, the gym was packed for the season opener for both teams.  It was a battle for 32 minutes.  Valpo led at the half, 31-29.  And at the end of three quarters had extended their lead to 47-43.

The Vikings extended their lead to four points with three minutes to go and went into a stall to try and force Portage to foul.  Portage did, the Viking player missed the first of a one and one situation and Clements came down and scored to close the lead to two points.  Portage had to foul again, another Viking player missed the free throw and Sabo scored to tie the game with 58 seconds remaining at 55-55.

The Vikings missed a field goal attempt, Sabo was fouled and proceeded to hit two free throws and PHS held the lead.  Clements stole a pass and made a layup and a free throw to extend the lead to five, 60-55.

The final would end 62-57, with PHS outscoring Valpo 19-10 in the final quarter.  Clements would lead the team in scoring with 15 points and Vaught added 11, as the Indians celebrated their first win of the season. 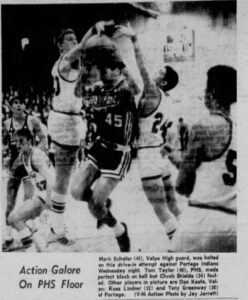 Several night later the team would travel to River Forest, losing in an upset 68-63.  Poor shooting was the cause as the team was 25 of 81 from the floor (30.8%).  They outrebounded the Ingots by a remarkable 66-17 advantage!  The team was hindered with four players fouling out including high scorer Greenway who netted 16 in the loss.

With a 1-1 record the team hosted Highland and would escape with a 60-59 victory, after leading the visitors by 10 points with a minute to go.  It was a wild finish with Highland stealing the ball and scoring several times to close the margin to one before the final buzzer sounded.  Cahillane led the team with a double double, 17 points and 11 rebounds.  The team would host Calumet the following night and secure an 83-58 victory to improve to 3-1 on the season.  It was foul filled contest with 62 total fouls being called (Calumet 35, Portage 27) and six players fouling out (Portage 4, Calumet 2).  The Indians shot an incredible 53 free throws in the contest, making 37.  Four players would score in double figures: Greenway (12), Taylor (11) with Vaught and Stanley (ten each).

The team had a 3-1 record as they traveled the next week to Michigan City to play the new school MC Rogers in the Elston gym.  Portage would lose the game in overtime after leading by five points entering the fourth period.  MCR would outscore PHS 25-20 in the final eight minutes to tie the game at 74-74 and send it into overtime.  The Raiders would win a close one 81-80 as four Indians fouled out in the contest (including Greenway for the fourth straight game).  Greenway led the team with 29 points and Sabo added 16.

The team would travel to Know the following week and lose 68-62.  Once again, the Indians led by four entering the 4th period, but could not hold on as the Redskins outscored the visitors 21-11 in the final eight minutes.  Cahillane led the team with 22 points.  The following night Goodnight’s crew would host ranked South Bend St Joe.  St Joe was undefeated entering the game, and exited undefeated with a 74-66 win over the host Indians.  Portage could not contain St Joe all stater Tom Abernathy who had 30 points.  Greenway led Portage with 16 with Cahillane adding 15.

The team had now lost 3 straight games as they traveled to Huntington for a holiday tourney.  They would lose the afternoon game 84-74 to the host school, before beating Muncie North in the consolation game 101-94 in a double overtime thriller.  Greenway led the team with 27 points in each of the games.  Lindner added 11 and Taylor 10 in the loss.  In the consolation win, Cahillane added 17 and Sabo 16.

Portage ended their losing streak on the last weekend of January, defeating Chesterton in overtime, 75-74, in a crowded Portage gym.  The game was remarkable in several items.  First there were 63 fouls called during the game, 40 on the Indians, 23 on Chesterton.  Chesterton would shoot 54 free throws, making 38.  Six Portage players would foul out and the team played the last minute of overtime with only four players on the court!  Antilla would lead the team with 21 points and Greenway and Sabo would add 14 and 12 respectively.  The team would venture to Gary Wirt the next night and walk away with another overtime win, 61-55.  Greenway would pace the team with 20 while Sabo would add 10.

With a 6-10 record the team hosted East Gary the following weekend and with four players scoring in double figures they beat East Gary 81-61.  Antilla led the team with 18 points followed by Greenway (16), Sabo (15) and Cahillane (14).  Cahillane also added 16 rebounds for a double double.  The following night the team would fall to a record of 7-11 with a two-point loss at Griffith 67-65.  Cahillane would lead in points with 24 and Antilla would add 23.

The Indians would close out the regular season with a 9-11 record with home wins over Horace Mann 99-78 (Greenway led with 28 points, Antilla 17 and Cahillane 15) and Hammond Gavit 76-68.  Once again Greenway led the team with 22 and Cahillane added 21 and Antilla with 15.  In the article for the Gavit game it opened with “A long season that must have produced more than a few sleepless night and ulcers in Portage finally came to an end Friday night, and in traditional fashion, the Indians found themselves in another close battle.” 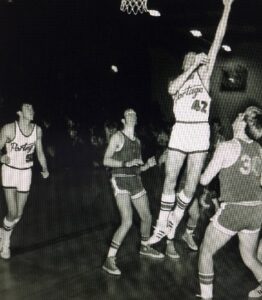 The team opened sectional play against Chesterton, who also had a 9-11 record.  The game was physical with a total of 45 fouls called (25 on Portage), but the defending sectional champs won a hard-fought game 66-60.  Antilla would lead the team with 26 points, followed by Cahillane (16) and Greenway (ten).

Greenway would add 12 rebounds for a double double.  Cahillane, Greenway and teammate Sabo would foul out, but the team advanced. 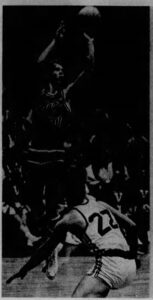 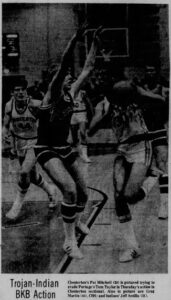 Up next for the team in the semifinals was Valpo who had a 15-6 record and finished the season by winning 14 of their last 15 games.  On paper they were considered the favorites.

The Indians took an 18-11 lead after the first period and never looked back, winning 61-49, advancing to the finals.

The Vidette Messenger considered PHS’ win over Valpo that night as the biggest shocker in sectionals history! 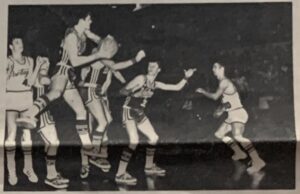 Greenway and Antilla versus Valpo Clipping courtesy of Jim Combs 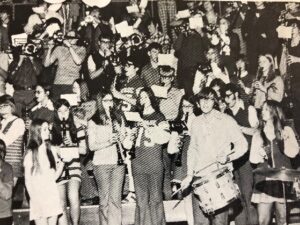 The following evening, the Indians would win their second consecutive sectional championship by defeating the Washington Township Senators 79-39.   Portage scored the first ten points and led after the first period 25-11.

By half time PHS was leading 45-20 and reserves had played much of the second quarter.  The starters would return for the third period and the reserves would finish the game. 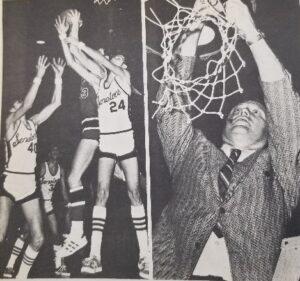 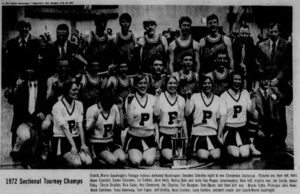 After starting the season 4-10, the Tribe had won eight of their last nine games in the last four weeks to stand at 12-11 and headed to South Bend for the regionals for the second straight year.

Their opponent in the first game would be South Bend St Joe, who had beaten the Indians in the Portage gym in December 74-66.  In that game the visitors had shot 60.4% from the floor making 32 of 53 shots.  In an article before the regionals started Goodnight had said the following about the upcoming game, “We’ll have to play one of our best games against St Joe and concentrate on defense.  Tom Abernathy, St Joe’s leading scorer is the one to stop.”  Abernathy had scored 30 points in December.  The Coach also added “They are the best defensive team we have played and they are just as quick as we are.”  The Vidette Messenger would discuss a Portage “miracle team.” 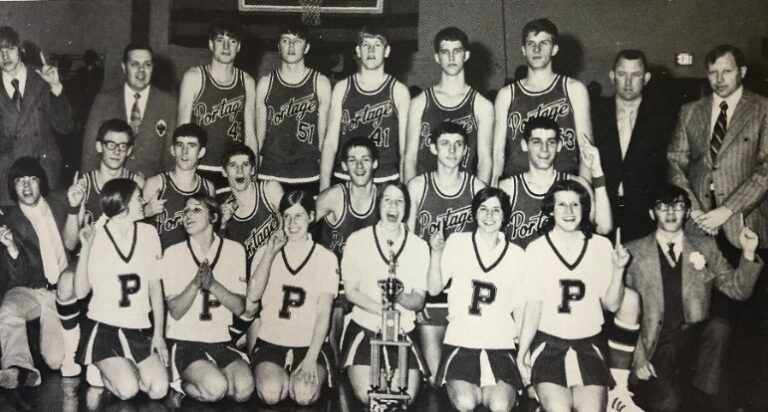 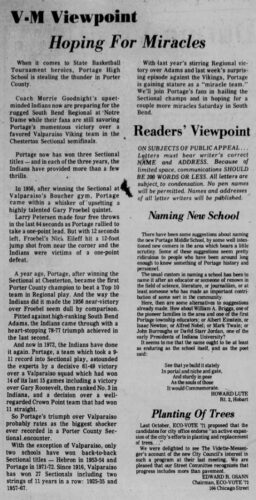 Unlike the previous years regional with all games being played on Saturday, the regional would be played on Friday and Saturday nights.  Their opponent, St Joe, was 22-2 on the year and ranked third in the state, so clearly Portage was in for a tough contest as the decided underdog.  The day before the regional contest the Vidette Messenger would warn fans to not discount the PHS team. 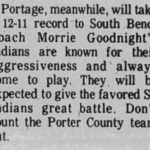 Before 9,412 fans in the Notre Dame Convocation center, Portage stunned the state and 3rd ranked St Joe Indians 60-53.   It was tied 21-21 at half and at the end of three quarters it was 32-31.  The upset would be achieved with PHS outscoring the 3rd ranked Indians 28-22 in the final eight minutes.  The game was won on the defensive end and at the free throw line.

On defense, Cahillane and Greenway took alternating turns defending Abernathy who finished with 20 points, five below his average.  Portage would make 26 of 31 free throws.  Shields would make 10-10 free throws and in the fourth quarter would score two baskets and 8 free throws to lead the team in the final stanza.  Shields would lead the team with 16 points, Antilla would add 13, Sabo 12 and Greenway 11.  It was  team effort for sure.

The Vidette Messenger would say that unlike the upset of SB Adams in 1971 due to all around shooting, in the upset of St Joe, “Portage came up with a terrific defense, poise and finesse, and the ability to make free throws when it counted.” In a post-game remark, St Joe’s great coach Bob Donewald would say “Portage outplayed us in all departments and deserved the win.”  The South Bend Tribune wrote “For the second year in a row Coach Morris Goodnight’s Portage squad said goodnight to South Bend’s sectional champion. … and 9,412 fans at Notre Dame were left wondering how Portage had managed to lose 11 games this year.” 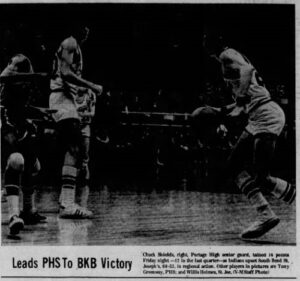 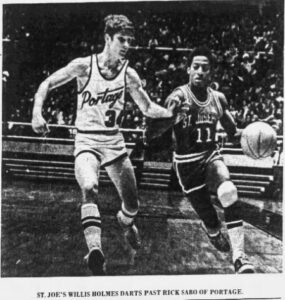 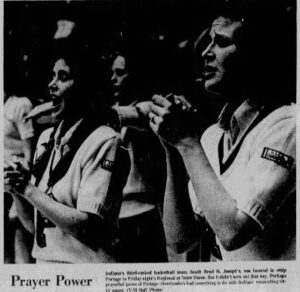 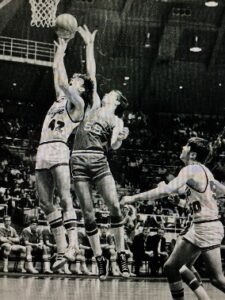 Cahillane scoring in upset over St Joe. Greenway on right. The size of Notre Dame’s ACC can be seen Photo compliment of Mark Cahillane

The Indians competed, but as the Vidette Messenger opened with in their article “This makes the second year in a row that the valiant Indians have bowed to a usually strong Michigan City team…. Elston just had too much all around firepower for Portage.”  The final was 82-58.  Elston would lead 44-34 before pulling away in the third.  Greenway would lead the team with 19 points and 12 rebounds.  Cahillane would play his last game in a Portage uniform with a double double scoring 16 points and pulling down ten boards.  Al Fleming of Michigan City, an Indiana All-Star and future star at the University of Arizona, would lead the Red Devils with 26 points and 10 rebounds.  Elston forward Don Thomas, an all-state football player and future three-year starter at middle linebacker at Indiana University (and an IU Hall of Famer), would add 18 points and nine rebounds.  It was a tough loss to end the season, but the team was defeated by a quality opponent.  For his heroics in the upset of St Joe, Shields would be named to the all-regional team. 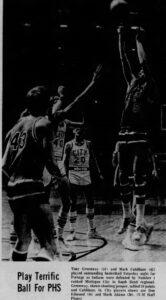 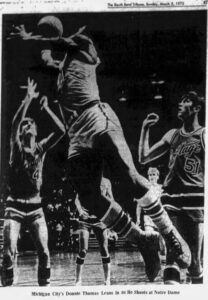 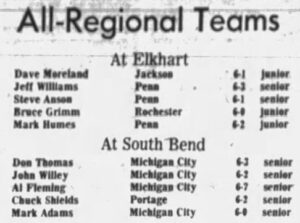 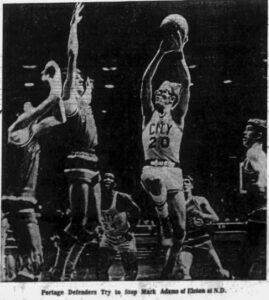 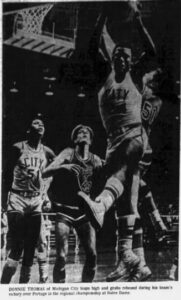 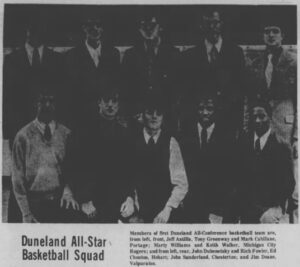 Three Indians would make the first all Duneland Conference basketball team.  Seniors Antilla and Cahillane and junior Greenway.  These three would also be the leading scorers for the Tribe with Greenway scoring 372 points (15.5 average), Cahillane 311 (13.5) and Antilla 295 (11.8).   Greenway, whom Goodnight told the South Bend Tribune, “has all of the equipment to be one of the state’s best players next year” put up 15.5 points per game despite fouling out of 14 games.  In total the Indians had 38 players removed from games due to fouls during the season and averaged committing 22 fouls per game.

For a team that was expected to rebuild, the Indians had overachieved and brought home a second consecutive sectional title and scored an upset over what is to be believed the highest ranked opponent in school history.  Despite finishing with a 13-12 record, the team had finished strong, winning nine of their last 11 games.  Additionally, the Indians had defeated two teams that won sectionals, St Joe and Calumet but also competed well in losses to two sectional winners and one regional winner.  Hobart, Knox and undefeated until then regional winner Michigan City Elston.  Seniors Jeff Antilla, Mark Cahillane, Chuck Shields and Tom Taylor would graduate with something no other Portage players had ever accomplished, able to say they were a two-time sectional champion in basketball. 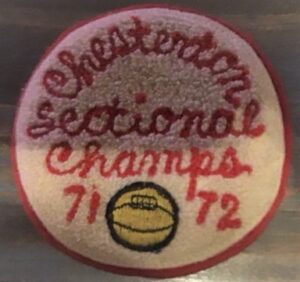