As near as we know, the house was built by Charles Trager between 1900 and 1920. Judging by its construction, it was probably nearer to 1900.

Charles Trager, then son of John and Mary (Dearks) Trager, was born in September 1867 in Indiana. John and Mary Trager were the parents of nine children.

Charles Trager married a lady named Elizabeth who was born in Germany in June 1872. They were the parents of four children – Edna, born October 1889, Marie (Minnie) born December 1893, Walter, born August 1899 and Lena who was born in 1906.

This story ran on nwitimes.com on Monday, May 3, 2004 12:17 AM CDT
Study looks at restoring historic Trager farmhouse
BY BEVERLY OVERMYER
Times Correspondent
The old Trager farmstead stands in Countryside Park in Portage as it did more than 100 years ago. In 1898 the property was sold by John Trager to his son Charles for $1.
Nearly a century later, in 1988, the farm was leased to the Portage Community Historical Society for $1 a year by the Portage Park Department that had bought the property in 1983.
The original indenture document is written in a tiny spidery hand by Louis Wattengal, notary public for Porter County. John and his wife Annie both signed the document with an “X.”
The first Trager settlers had come from Germany and owned many farms in the area. John Trager (often spelled Traeger) bought the land in 1872 from George Earle.
Charles Trager and his wife Elizabeth raised three daughters and a son on the farm. Stories told to historical society members recall a large quilting frame set up in the dining room, where, at other times, dances were held for neighbors.
“It was a pretty typical Indiana farm at the turn of the century,” said Al Goin, chairman of the board of the historical society. “There was the two-story farmhouse, a barn for the cows and pigs, a milk shed, tool shed, and an orchard with apple, pear and cherry trees and a swampy farm pond.”
Unfortunately, by the time the park department leased the farm to the society, vandals had broken the windows and kicked in the plaster walls. The society paneled the walls and made necessary repairs to create their first museum in the house in 1989.
The members filled the farmhouse with antiques from local residents to blend in with the original pine flooring and wainscoting.
The cedar shake roof and lap siding were replaced and the milk shed and tool shed restored to their turn-of-the-century appearance.
A pole barn was built to house the growing collection of historic artifacts.
These projects were funded by many local organizations and residents, many descendants of the pioneering families of Portage township, the park department, labor unions, city council, businesses and Build Indiana.
Current plans for the adaptive re-use of the house and barn are in the feasibility-study stage, Goin said. The barn will retain the stalls on the first floor where the society’s buggy and farm equipment will be displayed. The second floor, supported by log beams still covered with ancient bark, will be converted to provide meeting or party rooms.
The farmhouse will have the porches restored relying on old photographs, one of which shows Mrs. Trager in long skirt up on a ladder with a brush in her hand, painting a elaborate turned pillar.
“This property is a real gem,” said Erica Taylor, director of the Calumet Region for Historic Landmarks Foundation of Indiana. “This is one of the best local historical museums I’ve seen.”
The pole barn museum is open to the public Wednesday, Friday and Saturday from 11 a.m. to 3 p.m. On June 26, the society will host its All American family picnic.
The society has published two books of Portage homes as well as ones for historic post offices and churches. A pictorial history of Portage and a set of post cards featuring historic photographs are also available at the museum. 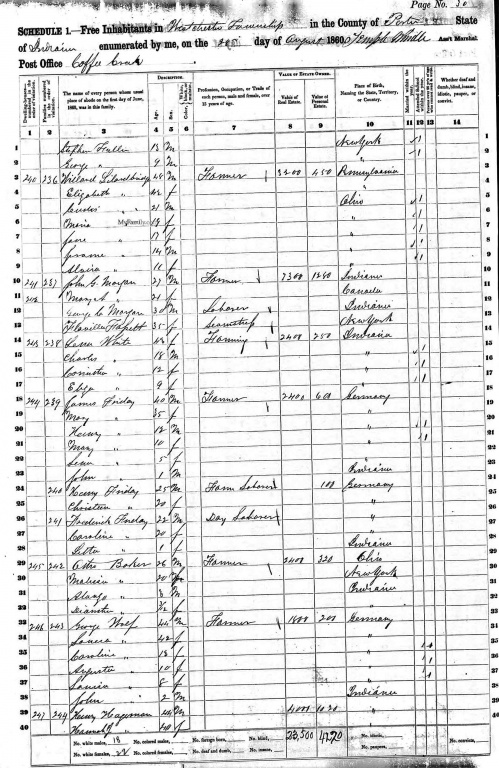