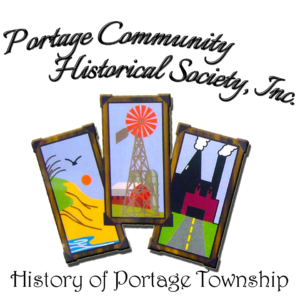 The Portage area was controlled by the Pottawatomie Indians well into the 19th century. The Indians did not sell out their major land holdings until, 1932. There was little bloodshed as the Indians left the land. Among the lasting reminders of the Indian episode is “Calumet”, the Pottawatomie word for peace.

Portage Township received its name from a county of the same name in Ohio. It was organized at the time of the general division of the territory of the county in 1836. The township varies from a level prairie in the south to sand hills in the north.

Due to the crossroads character of the location, modes of transportation were rather quickly developed. The first staff coach line ran from Detroit to Chicago and was started along the lake shore in 1833, but the sand was too soft to support the wagons and the route was shifted southward through Crisman – in fact, through the current school playground there. Another portion of the old stage route followed what later became U.S. Highway 12. The stagecoach was the only public conveyance for some 30 years until the railroads replaced it.

The first settlers’ homes were built of logs without nails. Windows were made of greased paper and doors of a quilt with sticks across. The first schoolhouse built at Crisman was constructed in 1854. It was built of logs and was used for school only in the winter time.

One of the first Portage settlers was Jacob Wolf who came in the spring of 1834. S.P. Robbins, Isaac Crisman and Mr. McCool were other early settlers.

For many years Portage remained primarily agricultural with some residential growth of people from the south who worked in the steel mills and other industries in Lake County.

With the construction of two mills, Midwest Steel and Bethlehem Steel and completion of the Port of Indiana, population boomed.

In 1960 the city’s population was 11,822 – the 1968 special census reported a figure of 18,340. The northern third of the township, especially above U.S. 20, is mainly industry while the southern two-thirds is single and multiple residences, spaced retail operations and farm area.

(the above was found in our society archives with no name or date, I typed it exactly as it was printed. KHeckman October 2018)