This free country of America affords numberless instances of men who have made their way alone in life, having nothing upon which to depend but their own strong arms and determination to do and to succeed. Such men are always self-reliant, their necessities having taught them that what is done must be done through themselves alone. They are worthy and well qualified to perform what duties they are called upon to discharge, and are almost universally leaders of thought in their communities, and lead lives of great usefulness. Such a man is Conrad Bender, who was born in the village of Hornau, near Frankfort, Germany, September 1, 1844, his parents being Peter Conrad and Catherine (Bender) Bender. The paternal grandfather, Conrad Bender, was a native of the same country, and although a shoe-maker by trade, he gave the most of his attention to farming. During the French Revolution he served in the German Army, and died about 1852, at the age of sixty-five years. His wife, whose maiden name was Margaret Miller, died in ] 850, having become the mother of the following children: Catherine (Kargus), who died in Nebraska; Margaret, who died in Germany, leaving a family; Madalena (Paul), of Lake County, Indiana; Eva (Welk), of Germany; Elizabeth (Jacobi), who died in Milwaukee; Anna (Krebs), who died in Germany, leaving a large family; Peter, who died in Germany, leaving a family; Christian, who also died there, leaving a son and eight daughters; Peter and Mat., the latter dying unmarried. Peter Conrad Bender was born on the 30th of March, 1817, in Germany, and was married on the 14th of November, 1842. He for some time labored on a railroad in the German Empire, but in January, 1855, became a resident of the United States, reaching this country after a five week’s ocean voyage. He at once went west to the city of Chicago, and thence came to Porter County, Indiana, where he began working by the day, and rented land until the fall of 1863, when he purchased a tract of land for which he paid $13 per acre. This land he cleared and improved, and afterward eighty acres of land which he added to his original purchase. In 1879 he sold this property, and until September, 1883, he made his home with his son, Conrad, after which he and his wife moved to Marshall County, Kansas, where they made their home for seven years. At the end of that time they retured to Indiana, and in the fall of 1891 moved to Merrick County, Nebraska, where they reside with a son. The father is a Democrat in politics. He and his wife are the parents of nine children, the eldest of whom died in Germany. The others are Conrad; Joseph, who served in a Michigan regiment during the Civil War; Jacob, of Nebraska; John, who died at the age of twenty-four; Martin, a resident of Kansas; Peter was killed in Kansas when thirty-four years of age; Frank, a resident of Kansas, and Margaret (Schill), who resides in Chicago. Conrad Bender came with his mother and six children to the United States in January, 1856, landing after a voyage of six weeks. He has resided on a farm ever since coming to this country, and at the age of twelve years began to make his own way in the world. When fourteen he began working by the month, and continued thus employed the greater part of the time until he attained the age of eighteen. In October, 1864, he enlisted in Company A, Eighty-third Indiana Infantry, but in April, 1865, was attached to the Forty-eighth Indiana, participating in the engagement at Whiteside, North Carolina, and also in several skirmishes. He received his discharge at Louisville, Kentucky, in July, 1865, after having participated in the grand review at Washington, District of Columbia. After his return he worked on different railroads for a short time, after which he made a trip west and worked in Chicago for one season. He then assisted his father on the farm until his marriage, which occurred in April, 1877, after which he rented land for two years. In the fall of 1878 he purchased the old homestead, and located on it in the spring of the following year. Since that time he has greatly improved it in many ways, especially in regard to farm buildings of different kinds, and has found a profitable source of revenue in keeping a dairy. His wife, whose maiden name was Emma Suhr, was born in Germany, a daughter of Frederick and Fredreka (Lichtwarle) Suhr, who came to this country in 1870, and located in South Chicago. Mr. Suhr was a miller in Germany. He came to this country with three children: Fredreka (Harder), of Chicago; Henry and Emma. The mother of these children died in June, 1892, at the age of sixty-five years. She had been married twice, first to Charles Schmidt, by whom she had one son – Charles. To our subject and his wife the following children have been born: Edward F., John H., Martha F., Ida A., Bertha A., Albert C., and Frank J. The eldest child was Arthur, who died in infancy. Mrs. Bender is a member of the Lutheran Church, while he is a Roman Catholic. 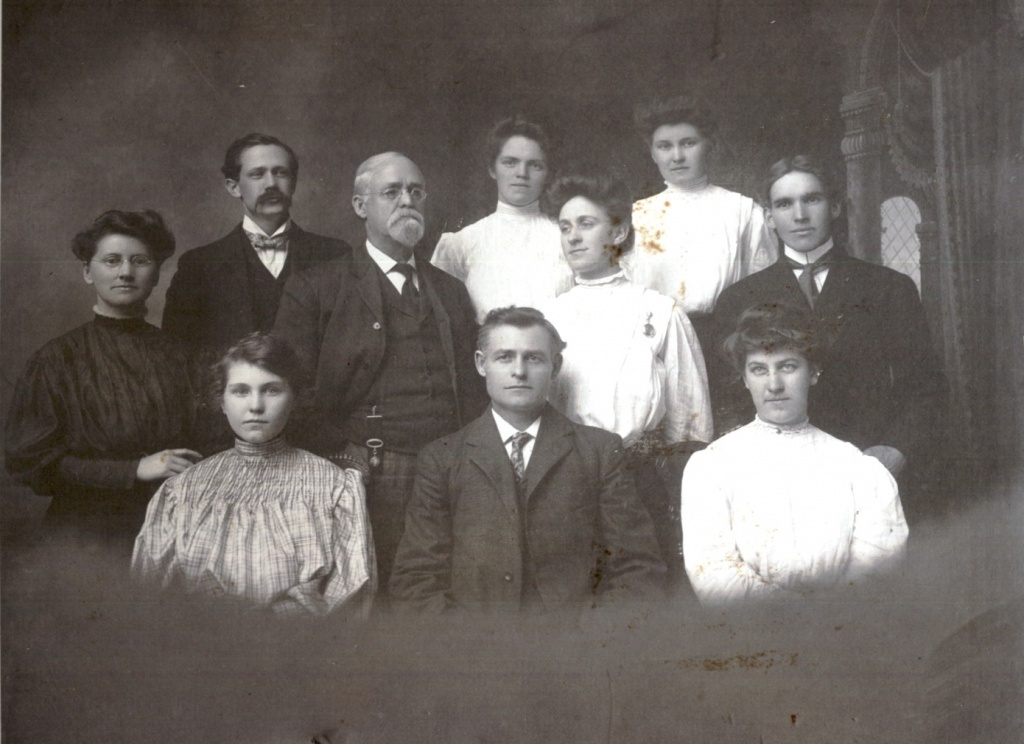